The first machinery shop of Heraklion 100 years ago: By Choumerianos family 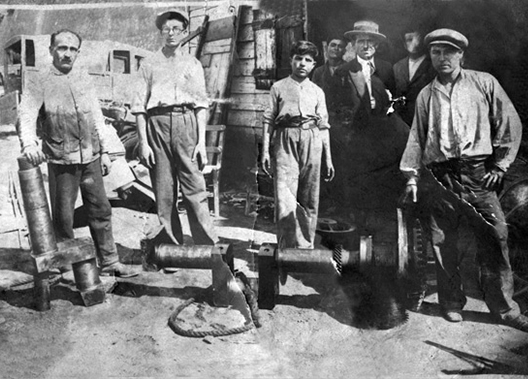 The first machinery shop of Heraklion 100 years ago: By Choumerianos family

At the beginning of the 20th century, the Industrial Revolution began to affect Heraklion, where new jobs, modern specialties for the time, started to emerge. The young man Giorgos Choumerianos (1880-1963) understands the challenges of the times and goes to Piraeus, where for a while he becomes an apprentice at the large scale machinery shops of Kontogiannis where, as he said, 700 people were working at the beginning of the 20th century.

He will develop the skillset of a mechanic mainly for ships, that had just begun to use machines, but also for the first cars that had just emerged. He will return to Heraklion and in 1910 he will establish the first machinery shop in the area of ‘Chanioporta’, where the public bus services operate today. The facility will be housed in a shack, in front of the wall, and the means will be rudimentary. When he later makes a family (he has a total of 9 children, 5 boys and 4 girls), he will put at work some of his boys. Among these, Kimonas and Stavros. Later in this machinery shop, the Choumerianos family built and installed electric generators, olive oil extractors for the first factories, as well as other machinery used in agriculture.

The photograph we publish today belongs to Kimonas’s son, Mr. Miltos Choumerianos and his grandson, Mr. Alexandros Choumerianos, who continue the profession of their family, having expanded their activities and are now engaged in the manufacture of energy conservation and environmental protection machines. The photograph dates back to 1928 and the area seen on it can be discerned, where until 1941 the machinery shop operated and founded by Giorgos Choumerianos. The 17-year-old Kimonas (1911-1985) is second from the left with his glasses, while on his left, in the middle of the photo, the young man is Stavros’s younger brother. On the right with the cap is the craftsman Ilias Klapsis, who made springs, initially for the carts and then for the cars. Later he established his own garage. On the left is the craftsman Kostas Vardoulakis, while between Stavros Choumerianos and Ilias Klapsis the customers of the machinery shop are depicted. Giorgos Choumerianos is not shown in the photo. In front of the craftsmen is a broken crankshaft of a ship, which it had been transported for repair. The shack of the machinery shop can also be discerned, and on the left vehicles of the era, were probably transferred to repair mechanical problems. Part of the Venetian wall is also visible.

As mentioned above, the machinery shop remained in that location until May 1941. According to the information given to us by Mr. Miltos Choumerianos, when the Germans entered the city on the side of ‘Chanioporta’, they rushed to blow it up, fearing that both the people’s expertise and the materials could be utilised to strengthen the resistance against them. Therefore, they transferred the machines to ‘Talos’ area where the construction site of the occupying forces was located. Members of Choumerianos family were also transferred to forced labour. During the entire occupation they were held hostage by the Germans and confined to their home, in the area of ‘Romantiki Gonia’. After the end of the occupation, the machinery shop re-operated towards the area close to ’62 Martiron’, with materials abandoned by the conquerors on their construction site. For a long time, even materials from deactivated bombs were converted to machines by craftsmen.